Gò Ngãi is located at Mỹ Thạnh Bắc village, Đức Huệ district, Long An province, about 80 km north-west of HCM City. The village is in a new economic area and home of many new settlers. They came to clear land and plant sugar canes or to work for the nearby Hiệp Hòa Sugar Mill. The population increases rapidly but there are not enough schools for children. 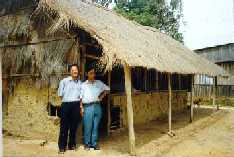 The existing school was built temporarily by the local setllers. It had two small classrooms of no more than 15 m2 each, of bamboo construction with thatched walls and roofs and bare earth floor. These classrooms were shared by 53 childrens in 4 classes, from grade 1 to grade 4. The building has been deteriorated rapidly in the last two years. Most of the children ceased study after the fourth grade because the closest school which has fifth grade is about 10 km away. 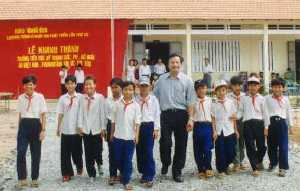 Dr Nguyễn Thiện Tống, our represenative, with school children on the opening day of the new school 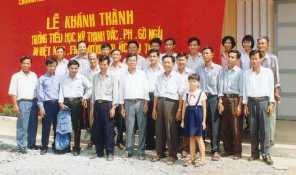 Teachers and parents at the opening day

The project
The project consisted of the construction and supply of:

Construction was commenced in August 1999 and completed in early October 1999. The Official Opening Ceremony was on 27 November 1999. 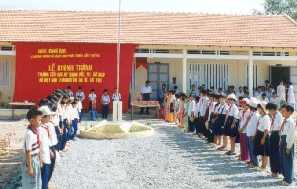 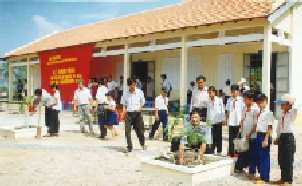 and planting trees for their new school

Contributions
Total cost of the project was VND182 million, of which the Vietnam Foundation contributed VND120 million (about AUD 20,000), local people contributed VND47 million and Tuổi Trẻ Newspaper VND15 million.
The local population also contributed labour to clear the site and to build the foundation, play yard and access roads.