The Mekong river delta is home to millions of Vietnamese. Many of these people rely on the extensive network of rivers and canals for transportation. Due to the recent fast economic development, most of the boats that crisscross the delta are motorised. The waves created by these boats relentlessly pound the river banks, causing enormous soil erosion.

Cause of soil erosion: motororised boats of various types and sizes

It is estimated that hundreds of hectares of cultivable land and thousands of kilometers of dikes are lost annually. However there has been no cost-effective mean to control the erosion.

Result of erosion: loss of land … 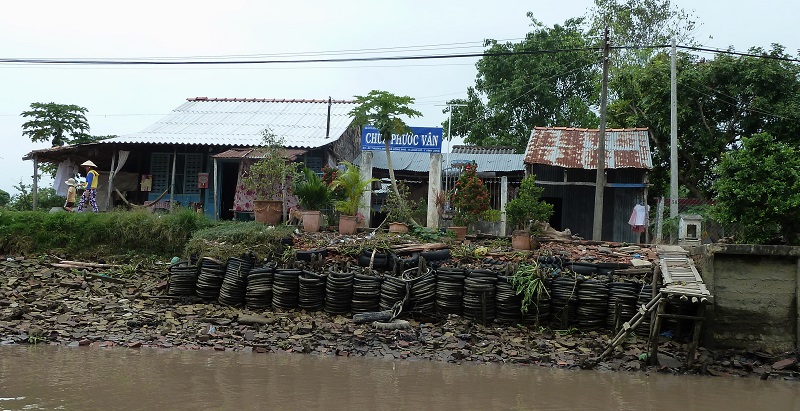 A temporary measure to prevent erosion

Vetiver Grass Technology
Vetiver Grass (Vetiveria Zizanioid) was first used for soil and water conservation in India in the 1980s. It has since been used successfully to stabilise land and to control soil erosion for mine tailing, highway embankments, dam banks, etc. in Australia and many other countries such as Malaysia, Thailand, China, etc. The grass was first introduced into Vietnam in the late 1990s by Dr Paul Trương, a specialist working at the Queensland Department of Natural Resources, Brisbane, Australia

Vetiver Grass project
Recognising that the Vetiver GrassTechnology is a low cost, labour intensive technology, suitable for rural Vietnam, the Vietnam Foundation supported a trial program that attempted, for the first time, to use Vetiver Grass for stabilising soil against erosion caused by waves in the Mekong Delta.

If the technology is proved successful then it will be widely introduced to people in the Mekong delta to combat the wave erosion problem.

Results
At the end of the first stage of the project (Mar 2002), a 4-hectare nursery consisting of 10 Million slips of grass has been set up, ready for use in the second stage. The research team also added studies of tolerance of the Vetiver Grass to acid sulphate and saline soils and use of the grass for stock feed.
Many other institutions, private enterprises and the governmental authorities have since shown great interests in the technology.

* These photos were taken from website of The Vetiver Network International